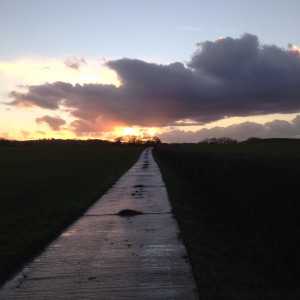 I came home from Totleigh Barton with a rattle in my boot. It’s there now, if I shake my foot beneath the desk. Sounds like a stone. No idea where I picked it up. On that long uphill track out of the fields, perhaps, or that silent road down past the stream that led to two different villages. It must have lodged itself somewhere along there. I vaguely remember walking back to the farm house along that deserted track and hearing a faint rattle, fancying that it came from somewhere around me; a rural stalker perhaps, some gnarled old woodsman, dragging a lame leg behind him as he dipped in and out of the trees, watching me, cradling an axe. I’ve got a city dweller’s head and the countryside agitates the darker corners of my imagination. It’s the sudden movements in hedgerows and the bellowing beasts in distant fields. I like it, though, the countryside, its strange remoteness. Makes me feel alive, in much the same way that writing does. That same awareness of existing in the moment, the same quickening of the blood.

The Freehouse of The Imagination at Totleigh Barton is a wonderful place to write. An ancient farmhouse set down in pastures of green nothing. No TV, no radio, no Internet, the nearest phone signal a decent stride away. I was there for the Arvon Tutor Development Week, along with a dozen other fellow writers/tutors and the course leaders, the poet Peter Sansom and novelist Tiffany Murray. Fine folk all. This was the fourth time I’d been to an Arvon Centre, but the first as a course participant. I didn’t really know what to expect. The main thing I wanted to do was widen my own frame of reference. For the past five years, most of my tutoring has happened in a very specific environment and one markedly different from the rolling soft fields of Devon. Creative Writing in prison can be immensely rewarding, but as a tutor it can sometimes limit the avenues you explore. Because I generally teach through the act of mutual learning, my aim for the week at Totleigh was to find out different ways to learn. And hopefully get some writing done.

The time on the course was chopped up between morning tutorials and exercises, presentations of shared practice from our peers and one-on-one consultations with Peter and Tiff. Afternoons were for writing and evenings were for readings in the barn. As ever in an Arvon house, the food was cooked up and served between all us on a rota basis. It was a peaceful, laid back vibe. I must admit, I did feel a pang of guilt at spending a week away from the domestic whirlwind. The idle observer could be forgiven for thinking that all I did was lounge about reading James Kelman and go back for seconds of bread and butter pudding. But now, when I look in my notebook, I can see we packed an awful lot into the days and covered a huge amount of ground. I flick through the pages and see fragments of childhood, a glass staircase, the ghost of David Bowie, a severed tongue flapping on a concrete playground, an aeroplane wreck at the bottom of the ocean and a worried tortoise called Adolphus. And that was just on the Tuesday.

It would be futile to try and recreate the magic of an Arvon course here on paper. These things are best experienced first hand, and then left to marinade in the memory, so that they may nourish and strengthen you for the days ahead. Suffice to say, I came away from the Freehouse of the Imagination with some new friends, a fresh perspective, and a bagful of brand new angles that will help me grow both as a tutor and a writer.

And I’ve still got my stone, kicking about every time I set down my foot. I wonder what kind of a stone it is? Flat? Round? Smooth or jagged? Big or small? It feels like it’s a fair size, rattling around down there. It’s not uncomfortable. I can’t actually feel it against my foot. It’s trapped somewhere within the sole itself. The mystery is – how did it get in? There’s no discernible hole in the boot, no entry or exit wound. I could gouge it out with some kind of implement, I suppose, but what then? I’d only set it down somewhere for it to get tidied away or forgotten, or thrown in a bin. And I want to remember my week at Totleigh Barton. I want to preserve the magic. So I’ll leave my stone where it is for now. I don’t mind the rattling. I’ll carry it around with me and see how far we get.