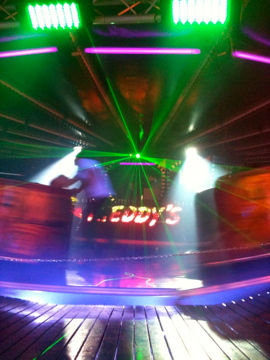 Hull Fair has appeared in literary fiction before Scream If You Want To Go Faster. In Alan Sillitoe’s Saturday Night And Sunday Morning the hero Arthur takes a brutal kicking at the local Fair, the Nottingham Goose Fair to give its full and traditional title. But after it says farewell to the Midlands, the Nottingham Goose Fair takes the M62 north and changes its name to Hull. I have no idea what happens to the Geese.

I loved Hull Fair when I was a kid. For me, it symbolized the start of a long spell of protracted celebration: my birthday, Halloween, Bonfire Night and then the big one, Christmas. Long dark nights lit up with raw excitement. And it all kicked off down Walton Street in the second week of October.

Hull Fair meant going out in the cold pitch-black and staying up late on a school night. It meant racing lights, head-pounding music, screaming crowds and a stomach heaving with excitement.

The build up was epic. All week at school you’d hear the kids who’d already been to Fair bragging about the rides they’d been on and parading the exotic plunder they’d brought back. Like Space Dust, the special exploding candy that made the inside of your skull snap crackle and pop. It was magic stuff, like having a head full of static electricity. Space Dust was like glue sniffing for eight year olds. I remember one little lad emptying an entire packet into his mouth and an excited crowd clustering around him to see what would happen. Would he pass out? Maybe he’d explode! Maybe his head would shoot from his scrawny little shoulders, fly up into the damp autumn sky like a super-charged space rocket and explode in a fanfare of sparks. But nothing happened. He necked the lot and then walked away laughing through a mouthful of foam. He was like the Keith Richards of West Hull Primary School.

When the big night finally rolled around it was like being injected with a hypo of raw adrenaline. I’d be almost beside myself with excitement, bouncing around on the top deck of the bus, rubbing portholes in the steamed up windows, straining for the first glimpse of
that halo of light.

As soon as you took your first steps down Walton Street you were besieged on all sides by gaudy temptation. It was like you’d died and gone straight to a seven year olds heaven. There were stalls stacked high with all manner of sweets and treats; giant slabs of pink and white nougat, bags of buttery brandy snap, coconuts banked up like hairy cannonballs, hanging bags of candy-floss, giant red and black licorice laces, sticky red toffee apples and chocolate dipped ones too, smothered in hundreds and thousands. There were steaming chip vans that stank of hot fat and vinegar. Other stalls would be groaning with cut-price piles of treasure, toy swords and dolls, wind up action figures and flashing yo-yos, fuzzy gonks and gremlins, Lucky Dip barrels packed with unknown pleasures buried beneath the sawdust. There was the LP On A String stall, where you hoped to reel in The Soundtrack to Grease or Never Mind The Bollocks but invariably ended up with The Best Of Timi Yuro or The Brighouse and Rastrick Band’s Twenty Golden Greats. My Dad said it was a bloody swizzle and deep down I knew he was right, but hope springs eternal in the breast of an infant pop fan.
Dotted between these emporiums of tat were the street hawkers and vendors, the ruddy-faced men with fistfuls of multi-coloured balloons, the Father Christmases with the nicotine stained fingers and the black bin bags full of early presents, the street preachers jabbing their fingers straight up to heaven, where they claimed Jesus was waiting for us if we would only lift our eyes to see him. The gypsy caravans, the daughters of the ancient sages and soothsayers beckoning you from doorways, offering the gift of second sight, as recommended by Vera Duckworth, Des O’Connor and Orville The Duck; fading faces on the posters outside their portable palaces.

And as you moved through this magical place, besieged on all sides by offers of instant gratification and promises of eternal redemption, your tiny hand gripped in the fist of a parent or older cousin, you always had one eye out for the opening, that gap in the stalls and shows and caravans that would afford you entry into the Fair proper, to the rides and the promise of mayhem beyond.
Hull Fair rides were the stuff of legend. Every year the local paper would scream headlines of kids being catapulted from the newly imported death traps from Europe – the Octopus, the Meteorite, the Dive Bombers, and the Bungee Jump. You would crane your neck to gawp up at these creaking cathedrals of light as their passengers were flung around at breakneck speed, their legs kicking the air above your tiny head and their shrieks of delight whipped away on the wind.

When I got old enough to go on my own or with my mates, Hull Fair took on another dimension completely. As a teenager, the Fair was about courtship ritual and mob mentality, a complete immersion in sensory pleasure, necking various combinations of medicines to aid and abet the carousels of colour. There are a million other stories from these times, some of which ended up in Scream If You Want To Go Faster. But to me now, as a dull and sensory numbed adult, Hull Fair provides a direct connection back to that first thrill of childhood, the drawing in of the darkness, my breath hung in plumes on the freezing October night, and that halo of light above the city where I grew up.