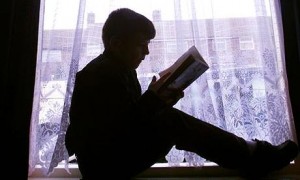 Hull College asked me to go in and say a few things about reading. Here’s what I said.

The first book I remember reading was called “The Tower By The Sea”. I don’t remember the name of the author and I don’t remember too much about the actual plot but one particular line in that book stuck in my mind and 40 years later it’s lodged there still. It was a description of the old woman who lived in the tower: “ … her eyes were a deep green, greener even than the eyes of her cat…” We had a cat and I remember reading that line and getting down on all fours to stare directly into the eyes of our family pet. Wow, I thought, how could you get a deeper green than that? I was about six years old and although at that age I loved comics and cartoons I quickly realised that black shapes on a white background could conjure up much more powerful images in my head than a whole Saturday morning of Technicolor capers. Basically, TV and comics did all the work for you – they showed you in definite detail what Dennis the Menace or Dick Dastardly looked like. Books allowed you the space to use your own imagination, a thousand times more powerful than any amount of pixels on a screen.

From then on in I was hooked on the written word. I devoured books like Jammy Dodgers. The second book I remember reading all the way through was A Pair Of Jesus Boots by Sylvia Sherry. This was the story of a young scallywag from Liverpool called Rocky O’Rourke, the leader of a gang of street urchins called The Cats. It was what I suppose now would be called a Young Adult book because it dealt with adult concerns; well, more adult than the Enid Blyton ever did. Rocky and The Cats were nothing like The Secret Seven or The Famous Five – they didn’t go off on wizard japes or have picnics with lashings of cream buns and ginger beer. The kids in Sylvia Sherry’s book hung around on street corners and got chased by rival gangs. The opening of A Pair Of Jesus Boots has The Cats breaking into an empty abandoned shop looking for stuff to pinch and sell down the docks. I could almost feel my stomach lurching as I turned the page – this wasn’t comfy cosy bedtime reading. To the eight or nine year old me it was electrifying. I’d found my preferred subject matter – picaresque tales from the wrong side of the tracks. I was enthralled.

In the summer holidays I would spend most of my time at my Nana’s house. Her second husband, my Granddad, was a sailor in the merchant navy and sailors, like fishermen, were big readers. He had stacks of American pulp fiction paperbacks stacked up in the back bedroom – gangsters, murderers, detectives, science fiction, tales of the supernatural and the Wild West. Well that was it for me; I was well and truly corrupted. My very favourite was a book called The Cannibal about a Vietnam veteran who went crazy and took to the New York sewers, emerging only at night to pierce people’s heads with a crowbar and drag them down into the stinking depths and feast on their flesh. He was pursued by an archetypal hard-bitten cop called Joe Keller who didn’t take no crap from his bosses and didn’t play by the rules. I got the distinct impression this was something I really shouldn’t be reading and again, it thrilled me enormously. I was no longer on Boothferry Estate on a damp August afternoon; I was wading waist deep through filth under the mean streets of New York City, armed only with a 45 magnum and a few ready wisecracks.

All this was all well and good and served to light up my dull days but then I read the book that changed everything for me. It was a book that not only made me laugh or gasp or quake in fright, it made me think as well. That book was The Adventures of Huckleberry Finn by Mark Twain. It wasn’t only an adventure story, it said something of social relevance, albeit the society of 19th Century Mississippi. The TV show Roots had recently been on the telly and I remember sitting down to watch with everyone else in the UK and being shocked and provoked into having to decide how I felt about being a member of the human race. And suddenly here was a book that dealt with the much the same issues but form the perspective of a twelve or thirteen year old kid. And it was written in dialect as well, the strangely mangled vernacular of the Deep South. The spelling was all wrong; it was almost like I had to re-learn grammar and English and the rules of language. The characters were burnt three dimensional in my brain, they spoke like real people and they said uncomfortable things – it was all very very real to me, and although the story was set in a time and place utterly alien to me it touched me deeply and I felt that recognition of the human condition, the common thread of empathy that, for me, runs through all great literature.

It was round about this time I had to take my options at school and the question loomed up – what did you want to do when you went out into the world? Well that was easy; I wanted to be a runaway tramp on a raft floating down the Mississippi. But obviously, that wasn’t on the school careers curriculum so I had to decide upon something else, like working at British Aerospace or for the Council Parks Division or something equally sensible, if not enthralling.

But I knew what I wanted to do; I wanted to be a writer. I wanted to create worlds with black shapes on white pieces of paper. I wanted to write the books I hadn’t found in libraries. Because, to be honest, I found that most of the books they pushed on me at school bored the absolute arse off me. I couldn’t stand Jane Austen or Thomas Hardy or Theodore Pumpernickel or all those other dreary worthy yawnsome Victorians with their flowery languages and parlour room verbal gymnastics. So for a while I abandoned books and got into rock n roll. I listened to song lyrics, especially bands like The Sex Pistols and The Jam and The Clash whose songs were about getting beaten up on tube stations or hijacking aeroplanes. And when I left school I decided that British Aerospace could get on with whatever they were doing without me. I joined a band and became the bass player and lyric writer. I only learnt the bass because I wanted to be the lyric writer. Song words to me were like the acceptable face of poetry. You could write stuff that rhymed and it didn’t have to be about the moon in June and none of your mates were gonna laugh at you for writing poetry because you had a leather jacket and a cig dangling from your mouth.

And it was through rock music that I discovered the books that shaped my life and attitudes and tastes for years to come – the Beats, Charles Bukowski, Raymond Carver, JG Ballard, Hubert Selby Jr, Albert Camus, and Dostoevsky and on and on and on. I even went back to those wordy English Victorians and learnt to love them too.

The lyrics turned into short stories, the short stories turned into long stories and eventually novels. Thirty years after the Tower By The Sea and the cat with the deep green eyes I became a writer. I still cherish books much more than any other physical objects or possessions because to me they are like magical machines that transport you through time and space. From my desk at home I can turn around and reach for the shelf and I can go anywhere inside my head – 16th Century Japan, 19th Century London, the wild frontiers of America or a remote planet in an exotic universe far far away. Books are still the greatest source of wonder for me and I don’t think that will ever change. The library card is the most powerful urban accessory available to modern man. Use these places, cherish them and read everything you can get your hands on. There’s no better buzz in town.